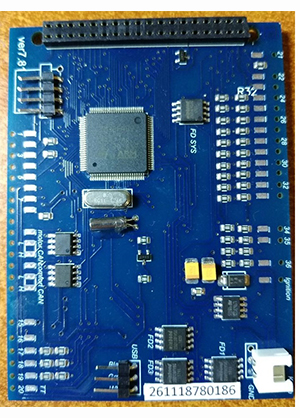 1.1 With a screwdriver torx T10, unscrew the two screws edges on the rear of the instrument panel. Bend all the latches and neatly remove the front of the case (with glass). Its better to put paper between the knives and the base of the device to avoid damaging it.

Pull the arrows up to yourself. Then remove the substrate. 1.3 Cut the jumpers, we work carefully, so as not to damage the board. There is  a temperature sensor in a fullFIS clusters. It can be removed with a soldering iron

or simply cut off the sensor tape in any convenient place, so that it does not interfere later.

1.5 With the help of pliers, we bend the metal clamps restraining fullFIS display. with which it is soldered to the board, do not tear off the display as you can damage the dashboard board. 1.6 Solder the plume of the standard display and remove it.

On some instrument panels, the plastic base of the OEM FIS is soldered to the board pretty hard,

to dismantle it — remove the tin, using a soldering iron and a special vacuum. There are visible white plastic latches, on the back of the board,

bend them with your fingers and take out the white plastic.

It was the basis of the old display. 1.8. Then you need to remove all the LEDs that are were under the standard display We make sure that there are no jumpers made of tin.
After removing the LEDs, clean the board from tin residues and rinse with alcohol.

VERY IMPORTANT:
For instruments with a halfFIS or fullFIS installed, it is necessary to find and cut

of the instrument panel (from the pins 17, 18, 19  of the grey connector)
Below are photos from some instruments.
On your device, the tracks may be located elsewhere 2.1 Start to build wires according to the table. Wires should be cleaned from Isolation, twisted and tin plated. 2.2  Remove LCD board from motherboard and Stretch the wires from MFD motherboard

to the blue and green connectors (grey — for Audi)  through the holes in the cluster`s board. 2.5 Lay the wires in such a way that they do not interfere with the installation of white Light diffuser.

In clusters for the American market, there are no open hood and

oil level control resistors, and there are no oil level and temperature sensors in the engine sump.

2.7 The wires should be pulled from the back or as shown above.

Wires should not interfere with the assembly of the cluster.

So it’s not right! There are two types of power supplies

Attention!
Before installing the power supply, you need to solder the wires to its contacts IN+, IN- and OUT+, OUT- ,
then apply a current of 12V to IN+, IN- , and connect the OUT+, OUT- wires to the multimeter.
Now we need to tune the output current. Using a small flat screwdriver, you should rotate tuning resistor
clockwise, until you have 5.5V output voltage on the multimeter.
Next, we place the power supply on the cluster`s back board and bring wires from the blue connector to its contacts.
How to do this, look at the connection diagram specifically for your car model.
Choose the place of installation of the power supply so that during assembly it does not interfere.

Choose the installation location of the power supply so that it does not interfere later in the assembly. For example:

After wiring, lay it so that they do not interfere with further assembly.

Need to  call all contacts and check on the table to avoid confusion anywhere.

2.9 Before assembly, check the functionality of the module in your car. After wiring, lay it so that they do not interfere with further assembly. Check wiring with multimeter, in Diode mode.

On the display, at the back, there is a piece of double-sided tape (if yours doesn`t have it, attach one). Don`t remove the protective film from it! We use it only as a support for the display!

3.9 Install a white diffuser and cut off the excess (as shown in the picture).

Then place the display and align it so that it clearly fits into the cluster window. 3.10 IMPORTANT! For greater stability, after you have tried and calibrated it, fix its position with hot-melt adhesive. 3.11 Next, you need to glue the matte protective film so that the display does not glare in the sun. Attention!
Be sure to stick the film!
Otherwise, the display may be damaged! You will need to add one PIN to the dashboard 32 pin grey connector.

The other end of the wire must be connected to the engine ECU.
According to the table below, you should find the signal wire of the boost sensor.
When the engine is idling, the voltage on the wire should be between 1.6 and 1.9 volts.

With an increase in RPM (engine speed), the voltage on this wire should increase. In general, as I know, in all diesel 1.9Turbo, supercharging is connected to the 71st pin,

And the gasoline 1.8T is connected to the 101 pin. The color of the wire can vary depending on the year / engine.

Collect everything in the reverse order, without forgetting to calibrate the needles with the help of the VAG-com program.


7. Take a photo and post it on all social networks.
Go to auto club meeting and brag to your friends.

8. Show it to your girlfriend/wife with words: «Look what a cool thing I bought for just 20 b